Too busy to blog! – News from semester one.

Posted by sarah Haynes on February 1, 2016 in Engagement with Industry, Student Activity, Television, Uncategorized |No Comments 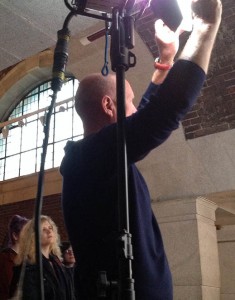 The masterclass was for level 5 students on the Drama  module to inspire their use of lighting in their drama productions.

A masterclass for camera was also part of this module to introduce the new camera kit we had delivered over the summer, this included the gimbal (for fluid hand held sequences). Alan Humphreys, (Red Leaf Media, documentary maker and cameraman) delivered this workshop and also came in for an introductory camera workshop for level 4 students earlier in the year.

Level 4 students had inspirational talks from several local media companies right at the start of their course in the module Introduction to the Media Industry, including:
Mocha, http://www.mocha.tv, First Take, http://www.first-take.org and Robot Foundry, http://robotfoundry.co.uk

In December the level 5 students were given a lecture about the Impossible, by Stuart Nolan – http://stuartnolan.com. This talk by a member of the Magic Circle, concerned the art of directing attention and causing curiosity, essential for anyone seeking to grab a slice of audience attention.