Posted by simulated on March 20, 2014 in Uncategorized |No Comments

During the last couple of weeks of our Level 5 Multiplatform Production module, we’ve been joined by two great guest speakers. The first of these was Mark Fothergill.

Mark, an alumni of this department, has had an interesting career since he graduated a few years ago. He started off at ConkerMedia, the digital arm of Lime Pictures, where he was involved in the production of content that blended story, video, conversation and play across a number of platforms, for shows such as Hollyoaks and The Only Way is Essex.

From here he moved to the BBC’s Knowledge and Learning department where he could add the development of educational content to his CV.

Mark now works at McCann Manchester, where he is a Senior Content Producer. This involves him overseeing creative output, with the help of PR, social media and SEO (search engine optimisation) experts to develop brand stories and enhance brand loyalty or, to paraphrase his own words

“It’s my business to understand digital platforms and create opportunities for meaningful interactions.”

Mark gave our students a great insight into the structures and working methodologies of a sizeable organisation’s strategy for getting us all to engage with and then share content across platforms. Here we enter the murky world of, ‘Content Marketing’. Advertisers realise that traditional marketing has become irrelevant; we surf through and skip around platforms without so much as a cursory glance at banners and buttons, so how do they capture our attention? They are developing the art of creating valuable/spreadable content to attract and retain defined customers in the hope of enhancing their profitable behaviour, rather than the old, direct sell. Coca-Cola are good at this but a great example of the spreadable, is the wonderful ‘Sing it Kitty’.

The following week, our guest speaker was, Jon Wetherall. Jon heads up ‘Onteca‘ here in Liverpool and is involved in gaming, App development and generally very interested in exploiting the possibilities of the 2nd screen… though Jon would rightly suggest that our smartphones and tablets are probably our 1st screens. These are the devices we play, watch and communicate through; very often with that other screen, the TV, becoming the focus of those conversations. We used to describe those discussions we had about what we watched on the TV as ‘water cooler moments’ but this little cultural episode has been made irrelevant, we are discussing our TV viewing as it happens.

This has encouraged broadcasters to try and tempt us with their own 2nd screen content that ties in with the programme. If we’re all using Twitter, our focus is pulled away from the TV and the advertisers may rightfully assume that they’d be better off spending their marketing budgets where our attention lies. So how are the broadcasters going to do this? There is some focus on live TV; shows such as X-Factor ask the audience to collaborate but this is through the premium rate phone vote, which is a not inconsiderable little earner. Jon showed us a far more elegant solution developed in Israel (see the Youtube movie below). This is surely one of those doh! moments, why didn’t I think of that? It is so simple, genius. ITV certainly think so and are going to bring it to our screens in 2015.

Jon also discussed the monetisation of the 2nd screen and the alternative financing and distribution possibilities for innovative content. The space available to produce content that the broadcast industry’s commissioning structures never contemplate, though manage to find huge and profitable audiences via platforms such as Youtube. This allowed Jon the excuse to show us a clip of the wonderful, ‘Annoying Orange’. Such a cheap and frankly annoying collection of content would never get the go ahead from the BBC – though they might wish they had in retrospect of the huge viewing figures. 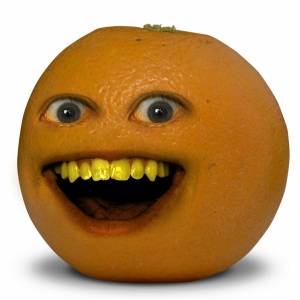 Mark and Jon both delivered entertaining and insightful sessions that led to students demanding internships and placements in their respective companies. Onteca is kindly in a position to offer a couple of our lucky level 5 students just such an opportunity.