Posted by camillaafffleck on February 7, 2014 in Student Activity, Television |No Comments

Media Production second years have the option to choose the TV Studio module in which they learn to produce an as-live multi-camera TV Studio programme, which also incorporates how to interpret and script a multi-camera shoot of a live local band using the BBC method of bar-counting, in LJMU’s state of the art TV Studio.

Each production team also designs their own unique studio set. This resulted in one group wheeling a professional pub bar the length of Liverpool’s Hope Street to dress the studio for their recording day. 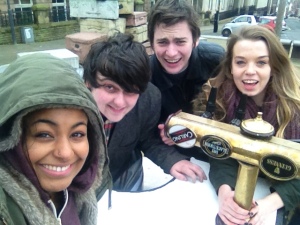 This module is tremendously challenging and lots of fun – both are key to making successful TV.

Reflecting on the experience of his first as-live studio recording day, one student described it as ” like coming back from your holidays with loads of stories to tell your friends!”